FOOD FOR THOUGHT – Improved Nutrition By Moving Back in Time 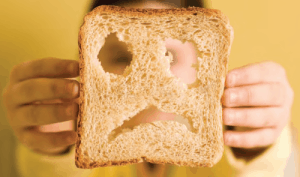 Earlier in this series we talked about what was inside a kernel of wheat and why eating ‘whole wheat’ products is a much better idea than consuming ‘enriched wheat’ foods. We went on to learn how wheat itself changed in the 50’s and 60’s. Now we are nearing the end of the story and are ready for the moral (or punchline depending on your prospective): While whole-wheat products are better than enriched wheat products, no modern-day wheat products in your diet is the best choice.

That’s a pretty harsh statement to make about a 10,000-year food tradition, but nothing about wheat is what is was—not the way we grow it, not the wheat itself, and perhaps most important, not the way we process it. From the beginning of time, wheat was milled 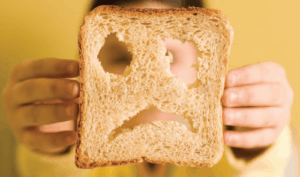 (breaking the grain open and grinding it) by working it between stones into flour that is digestible; thus, making wheat’s nutrients more available. Stone grinding worked best with ‘soft’ wheat varieties and used the whole seed—bran, germ, and endosperm—which was 100% extraction.

The material produced from this grinding could be sifted to remove larger pieces of leftover grain—the bran and germ. ‘Low grinding’ flour was unsifted from a single pass through the millstones. ‘High grinding’ was flour that had been reground multiple times and sifted extensively to remove the bran and germ. The upper classes preferred ‘high grinding’ flour which was white, had more gluten, and was thus more ‘fluffy’. Ironically, they could have eaten the very best, but they preferred the more expensive, less nutritious flour that had the bran and germ taken out.

During the nineteenth century, the United States was shifting from growing wheat in the harsh weather and rocky soils of the northeast to the optimal Midwest conditions where ‘hard’ wheat varieties were grown instead of ‘soft’. This transition required a new type of milling: Steel Roller Mills. The process in these mills allowed for quick, inexpensive removal of the bran and germ meaning virtually everyone could afford the preferred ‘white’ flour.

In 1920, the very first head of the Food and Drug Administration (FDA), Dr. Harvey Wiley tried to outlaw refined, white flour because of the loss of nutrition. Using the ‘steel roller’ made it so inexpensive to process wheat the United States begin exporting to Britain. There was a lot of backlash from the British Medical Society due to the fact that the wheat from ‘steel roller’ mills produced less nutritious flour. In 1924 medical doctor Charles Edward Shell wrote (rather poetically avoiding the use of the word ‘fart’) in the British Medical Journal:

A vital injury has been inflicted on our national well-being….[the flour] lacks the proteins, fat, vitamins, and mineral constituents present in the original grain, providing only an emasculated substitute which is not merely inefficient, but also directly harmful. A diet overloaded with starchy material produces fermentation and flatulence; it favours the development of an abundant intestinal flora embarrassing to the digestive economy, burdensome to the gastro-intestinal organs, and favourable to the free development and increased virulence of such pathogenic microbes as may obtain access to the intestinal tract.

Even then we knew, but efficiency took priority over nutrition. By 1950 the wheat itself was being ‘re-invented’ to increase production. The combination of the milling practices and elimination of wheat varieties dating to Biblical times was a ONE, TWO, KNOCKOUT!

So, what’s a girl to do? Rincon del Rio is thinking it’s about time we planted REAL wheat, process it in a manner that keeps the nutrition, and find exciting ways to bake it up into delicious food like Zelda (remember my mother?) used to make.

If the research is correct, our residents will experience weight loss, reduction of Type 2 diabetes, and elimination of a host of digestive and other health problems. The decision seems clear: Let’s get back to wheat as a nourishing staple and have some fun while we are at it. Watch for pictures as Rincon del Rio plants our first crop this winter.