Or: What Happened to Grain and How Celiac Disease Became an Epidemic

My mother baked bread three times a week while I grew up. Sometimes if there was extra dough she would fry it and make what she called scones.

They were really something—spectacular with her fresh-churned butter and beat jelly. Her bread was so good, that during lunch time in elementary school, the second-grade teacher, Mr. Bowles, would visit my table to swap sandwiches.

That was never a problem because all I wanted was ‘pretty’ sandwiches with thin, soft, fluffy white bread like my friends had. My mother refused to buy bread in the store. So, we always had thick sliced sandwiches with her homemade bread. (And Miracle Whip—a story for another day.)

The End of an Era? 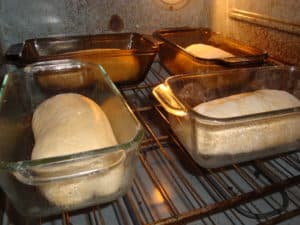 When my mother was in her 70’s, I happened to be visiting her on a day she was making bread. She was really distraught and depressed.

She sadly confided in me that she had lost ‘it’—‘it’ being her knack for making bread. As a woman of the times, she of course blamed herself for aging and being inadequate. (My father and brothers were always very happy to assure her that was, yes, indeed, the case.)

I remember looking into her sad, brown eyes and wondering if something had gone wrong with her yeast. (I had moved to California and learned about San Francisco Sour Dough Yeast.) As we sat quietly in her kitchen listening to her old refrigerator turn on an off, we watched the dough just not rise as it should.

If only I had known. Zelda (my mom) was the victim of changed wheat!  Too bad nobody told my mother to change her 60-year-old recipe to accommodate the transformed flour.

So, what changed? Almost everything. In the 60’s and 70’s agriculture started hybridizing for smaller or dwarf varieties of wheat. (Shorter wheat puts more of the plant’s energy into seed production, increasing yields.) Dwarf cultivars are also more resistant to “lodging” or falling over.

Although there was a drastic increase in the production capability of the dwarf super-hybridized wheat, the issue of digestibility and taste were never examined, which explains why my mother’s bread just wasn’t as good. Another result of hybridizations was increased gluten level which was a good thing for making tall, fluffy breads but a very bad thing for our insides.

Well, Mr. Bowles is dead now, and so is my mother’s recipe. Her delicious bread depended on grains that had been soaked, sprouted, and fermented to be prepared using slow rise yeast. (It was partially her yeast! The altered wheat needed super-fast rising yeast.)

It’s been over 50 years now since wheat-tampering began in earnest. The pendulum is swinging back and today, with a little extra effort, my mother could find some flour made with old-time wheat in order to regain “it”—her ‘knack’ for making really great bread.

Rincon del Rio is undertaking a project next month to plant some Pacific Bluestem Wheat. Our next blog talks about why we think this is an important thing for our residents.